“We’ve had the usual problems associated with the electric drive pivots. One unit has been rewired five times, thanks to copper thieves”

When Barry Hutto and his sons, Dean and Richard, made the decision to invest in their own center pivot irrigation systems, they thought it was time to make a change. They had already had enough bad experiences with electric pivots on land they were renting. So when it came time to buy pivots for their own property near their home west of Holly Hill, South Carolina, it was time to try the T-L hydraulic drive system.

“We thought, ‘We’ve already done it the old way; let’s try doing it the new way’,” says Barry, who represents the fifth generation on the farm. “A brand new electric system might work very well, but up to that point, we hadn’t really had any good experiences.”

“One of the electric pivots is actually shared with a neighbor,” Dean adds. “The well is on our side and the pivot base is on the neighbor’s field; so the pivot covers a half circle on each field,” he adds, noting that they just split the cost on percentage of use. Of the 500 acres we picked up, over half of it is irrigated with three electric units.”

“Not only have we had the usual problems associated with electric-drive pivots, but the one unit has been rewired about five times, thanks to copper thieves,” Barry adds. “They probably did us a favor this last time, though, because we added a number of new components in the process of getting it running again that we probably wouldn’t have added otherwise.”

Still, drip irrigation is a relatively new venture for the Hutto family and most of their neighbors. After renting the properties with center pivots already on them, the Huttos added their first T-L unit just a year later in 2006. Since that time, they’ve added at least one per year, bringing their total up 13 pivots at seven locations for total coverage of 850 acres. Of course, with 3,800 acres between the three partners, irrigated fields still represent less than one-fourth of the total.

“In 2005, we learned a lesson on drip irrigation,” Barry recalls. “That’s when we rented the fields with pivots already on them. Getting enough rain isn’t usually the problem in South Carolina because I have a 10-year history on my farm of a 100-bushel average on dryland corn,” he continues, noting that he and his sons farm together, but own their own property separately. “The problem occurs when you don’t get the rain at the right time. With drip irrigation, and the ability to put water on the field at critical stages, corn has been yielding close to a 225-bushel average.”

The difference was even more dramatic in 2011, when the Carolinas experienced a severe drought. While irrigated corn continued to yield 200 bushels or more — even though the pumps ran almost continuously — the Huttos’ dryland corn averaged just 10 bushels per acre.

“All together, we have about 1,350 acres of corn, 975 acres of wheat, 700 acres in cotton and 350 in peanuts,” Dean explains. “In addition, we’ll have about 1,250 acres of soybeans each year; but part of those acres are double-cropped behind the wheat.

“Right now, almost all of the irrigated fields are in corn, even though we do have about 50 acres of peanuts under a pivot,” he continues. “So we may have to look at our rotation down the road, since it has kind of gotten out of kilter. However, on our land, irrigated corn is the crop that makes us the most money, especially when you consider that we’re using chicken litter from some of the local poultry operations for fertilizer.”

The biggest challenge, though, isn’t the crop mix or even the availability of water. It’s small fields that are hard to irrigate with a pivot unit. “I’d say 85 percent of our fields are 40 acres or less in size,” Barry relates. “As a result, our largest T-L pivot covers 90 acres in a full circle and the smallest covers 40 acres. And of the pivots that we do have, about half make a full circle, while the other half are ‘wiper’ systems that cover a half circle or so.”

The other issue is distance, which was further incentive for eliminating the copper wiring that has become so tempting to thieves. According to Dean, over half the pivots that they have on their land are 15 miles or more from their farm headquarters.

“That kind of makes them an easy target when they’re out there in the boonies,” he says. “So, it puts us a little more at ease knowing there isn’t as much to steal. The reliability that comes with the hydraulic drive is also an advantage, given the distance between farms.”

Of course all three family members appreciate the hydraulic drive when it comes to service and troubleshooting.

“We realize T-L pivots are going to break down or have problems, too,” Barry relates. “But we all understand hydraulics and we know what to look for when there’s a problem with them. It’s a different story when you have to wade through wet corn that’s over your head in the middle of July and crawl up on top of a tower to look for a blown fuse. Instead of carrying a voltmeter and all that stuff, all you need are a couple of wrenches and you’re good to go.”

“T-L pivots are well worth the initial investment,” he concludes. “They’ve sure saved us a lot of extra expense and headaches.” 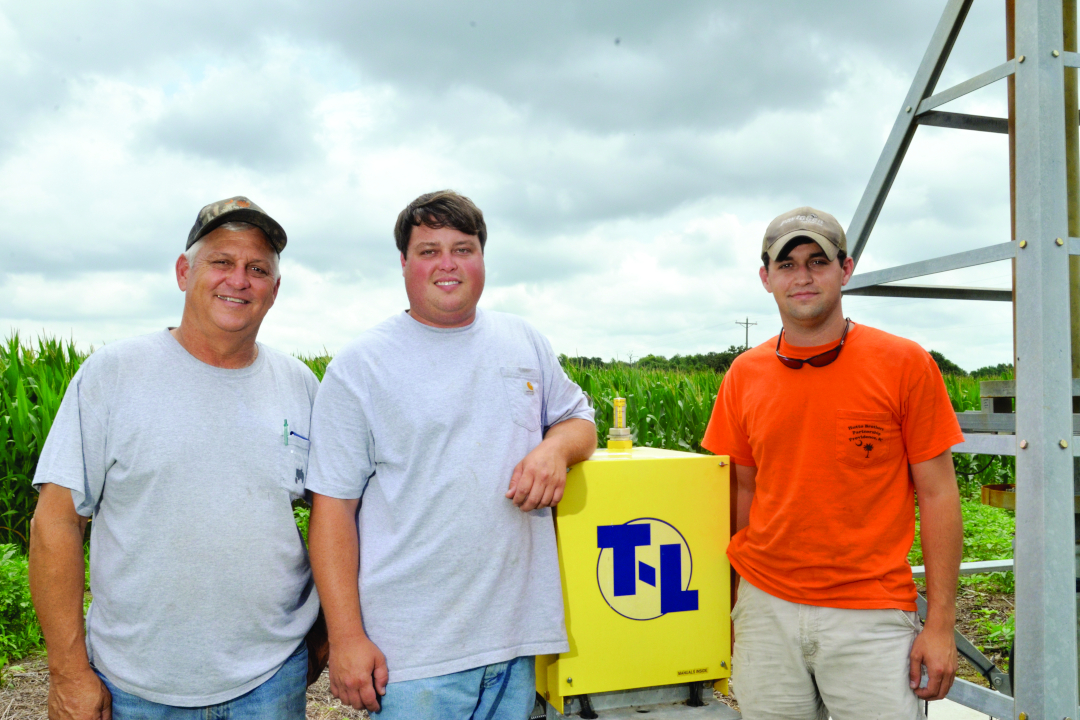