Bukoba, Tanzania
Back to Testimonials

“The T-L pivot is extremely robust and reliable and requires very little maintenance. Due to the simplicity of the hydraulic drive system, we are able to service, repair and maintain the machines with no need for assistance from the manufacturer. All components are readily available locally.”

Located next to the Kagera River near Bukoba, Tanzania, and just west of Lake Victoria, the largest freshwater lake in Africa, Kagera Sugar Limited certainly doesn’t suffer from a shortage of water. In addition to the vast amount of surface water, the area, which is located nearly 3,804 feet above sea level, receives about 31 inches of rainfall per year. Unfortunately, those rains don’t always come when they’re needed most. Moreover, parts of Tanzania have suffered from a drought the past three years. That hasn’t affected Kagera Sugar nearly as much as it used to, though, since they had the foresight in 2005 to install 42 T-L high-profile center pivot irrigation units on the 21,000 hectares (51,892 acres) farm. All total, that first round of pivots covered 3,156 hectares, or around 7,800 acres, of sugar cane.

Six years later, in 2011, the company purchased another 43 T-L pivots to cover another 3,390 hectares, or 8,376 acres. Even if the rains do come on time, though, it appears that center pivot irrigation has made a substantial difference. In 2014, Kagera Sugar Limited set a new production record at 55,000 tons.

Prior to that, the best level attained for processed sugar was 50,000 tons. The last 2 seasons have been drought years, in 2013/14 pivots out produced rain-fed by 56% and in 2014/15 by 86%. Fortunately, water has never been a limiting factor as two large lift pumps have the ability to move 10,000 gallons per minute to the pivots. Even the smaller pumps, which provide water directly to certain units, have a capacity of 3,300 gallons per minute. At present, phase 2B, which is already being designed, mapped and reviewed, will add T-L pivots to another 2,811 hectares (6,946 acres). That would put the majority of the sugar cane under center pivot irrigation since only about half the farm’s 21,000 hectares (51,892 acres) is devoted to sugar production.

The balance is in cattle production. “T-L was awarded the contract, not only due to their competitive price, but also due to our preference for the simple and reliable hydrostatic drive, which we felt was ideal for our local conditions,” says Ashwin Rana, general manager of Kagera Sugar Limited. “The T-L pivot is extremely robust and reliable and requires very little maintenance. Due to the simplicity of the hydraulic drive system, we are able to service, repair and maintain the machines with no need for assistance from the manufacturer. All components are readily available locally.”

Rana says they also feel that the T-L continuous movement hydrostatic drive gives them more even fertilization application. Another huge advantage is no electric motors or cable to be stolen. It would be impossible to enforce security inside the cane fields. “Due to the company’s remote location, several of their employees are being trained through operation, service and preventive maintenance programs every year,” says Randy George, T-L Vice-President of International Sales.

“However, even with the number of hours they put on a machine, they’ve had very few problems. Each pivot averages around 2,200 hours of use annually and some of the first machines put into service have already accumulated 24,000 hours or more. Total cost for annual maintenance, including preventive maintenance goods, averages $280 for each system.” “We have had few gearbox problems and minimal wheel track issues, which we attribute to the T-L continuous drive,” Rana adds. “Since the installation was completed and handed over, we have had no need to call on the manufacturer to attend to any of the systems on our estate. “We would be happy to recommend T-L to anyone looking at installing a center pivot irrigation system,” he concludes. 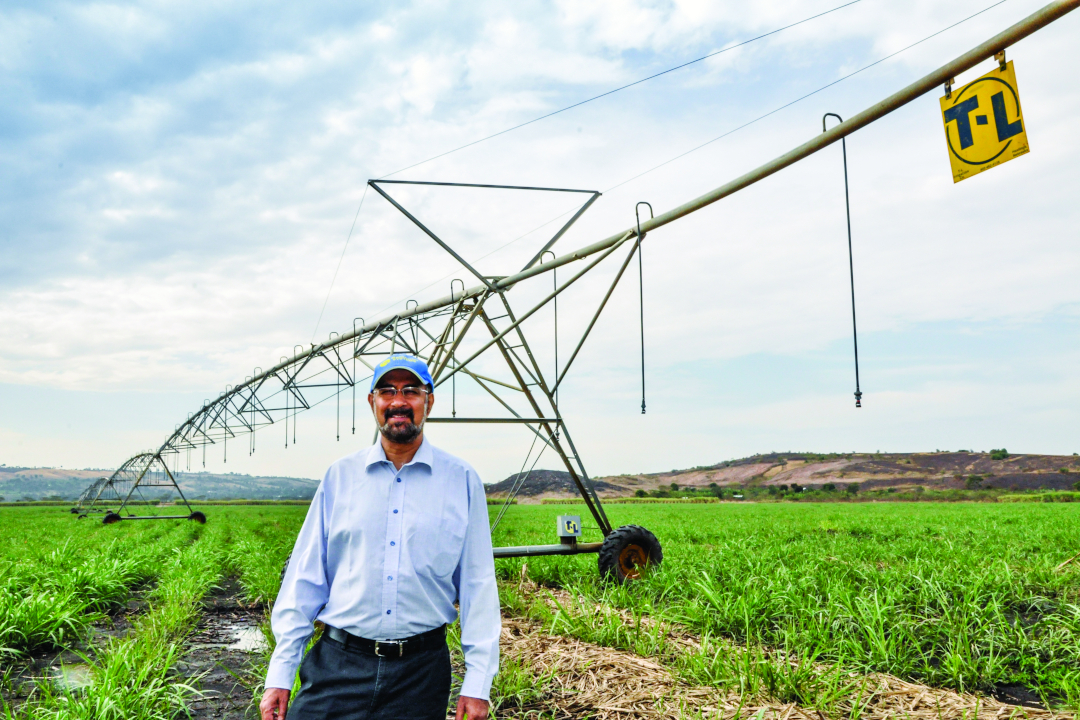