Strawn, Illinois
Back to Testimonials

"This is a simple and easy system to use and it works great with crops while being a tremendous labor saver."

When Art Lehmann points out that with the T-L owned by BLT Pork, Inc., “We’ve only had two service calls in eight years”, there’s more to the comment than you might expect. That’s because, during that time, the 160 acre unit has applied approximately 40 million gallons of… well, not exactly pristine water.

The equivalent of one to two million gallons of heavy material are taken out of the first stage lagoon and spread on fields each year. But, the “heavy lifting”, according to Lehmann, is done with a low pressure T-L utilizing drop nozzles.

There’s enough lagoon capacity so that, even with 34 inches of average annual rainfall, irrigation can wait to start in May or June and continue until Labor Day. The unit runs at least once every week and, depending on the weather, some weeks it may run almost continuously.

Most irrigation occurs in July and August to make maximum usage of both the water and the nutrients it contains. Trying to keep the center pivot moving fairly fast results in applying a half inch at a time. Use of effluent water actually began before the T-L was installed.

Back then, a hard hose traveling gun did the work. However, it required 30 runs to get across the field, and somebody had to reset and move it every six hours.

“We went to a center pivot system because it could eliminate so much of that labor,” Lehmann reports. “A new hard hose traveler will be in the neighborhood of $30,000. And, while a new T-L is approximately $60,000, the labor it eliminates will pay for the unit.”

There were actually two decisions made, he notes. The first was to switch to a less labor intensive center pivot. The second was to install a T-L, due to concerns about possible corrosion on electrical components by the nutrient rich effluent water.

“We also felt that as farmers, we could probably repair an oil leak if needed or fix something on a T-L,” Lehmann says. “Another major consideration was that we didn’t have anybody who could repair an electrical unit. Plus, there was the employee safety factor to think about.”

Contrary to what one might assume, an excess of nitrogen hasn’t been a soil problem. Neither has corrosion. According to Lehmann, that’s due to the lagoon system volatizing and, consequently, losing nitrogen. Most of the phosphorus stays in the first stage lagoon.

The amount of potassium is a little more than they care to see. However, this doesn’t represent a problem, since it’s soluble. Meanwhile, the veteran T-L irrigation system was moved to a new field this past season.

For seven years, except for a little bit in the corners and a spot or two, the only fertilizer added to the original field came through the drop nozzles. Over this period, corn yields have ranged from 150 to 190 bushels an acre.

As Lehmann points out, “It wasn’t an extremely good soil type; so, those are really good yields. “Without irrigation, the average yield would have been down to 120 bushels or so. We’ve probably saved $70 to $90 an acre in fertilizer costs every year.

“This is a simple and easy system to use,” he sums up, “and it works great with crops while being a tremendous labor saver.” When Art Lehmann points out that with the T-L owned by BLT Pork, Inc., “We’ve only had two service calls in eight years”, there’s more to the comment than you might expect. 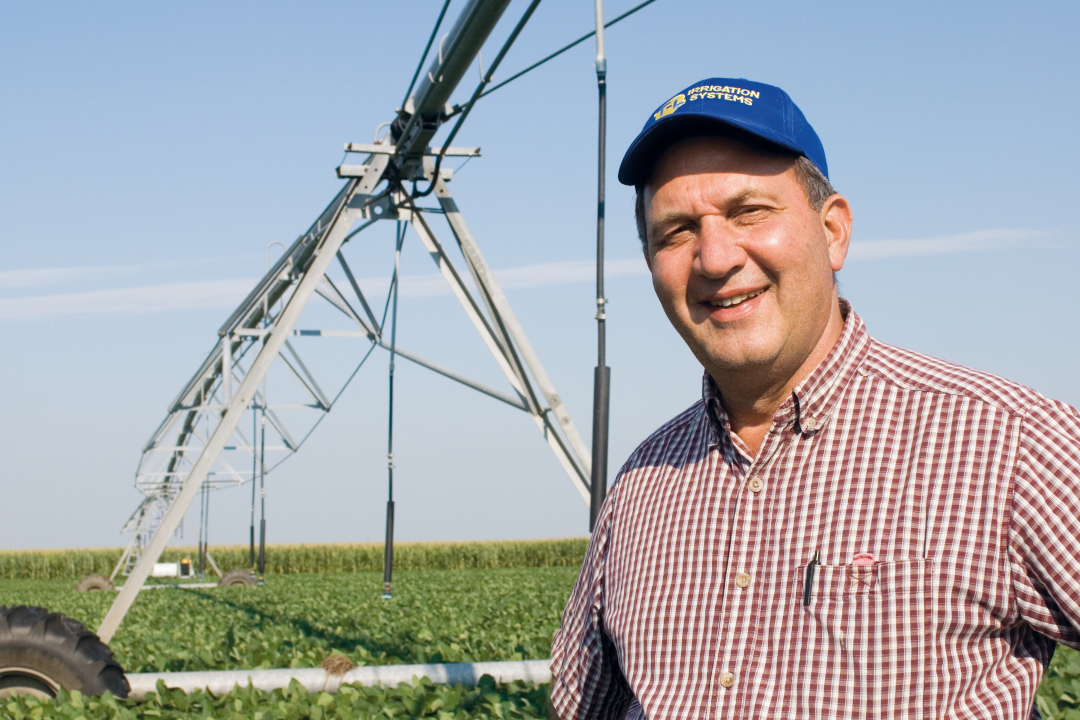