Pay To Play On Soybean Yields 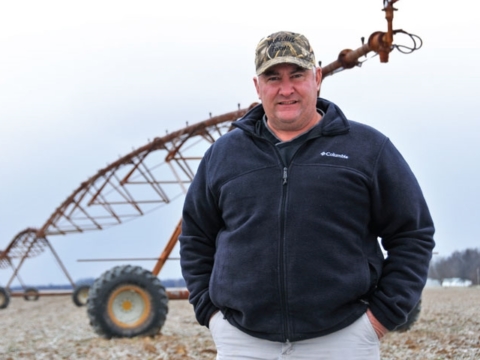 Come early spring, Phillip Meredith is running like he’s stolen something, desperate to get into his fields and scratch northern Kentucky

With abundant water supply and 1,650 acres under pivot irrigation, Kentucky farmer Phillip Meredith is able to zero-in on every detail of his soybean production.

ground. Out before dawn, loading seed, planting all day, no break and no dinner. Peeled to the bone, this is his version of a paid vacation. If not for the confines of Mother Nature, he would haul a planter behind his combine and work year-round. Meredith is a man possessed by farming.

His reputation as a hard-working grinder comes in tandem with recognition as a high-yielding producer. The formula for Meredith’s crop success? Consistent investment in high-end products to increase yield. His soybean yields topped 98.34 bu. per acre in 2015, testament to an uncompromising management approach: Pay now to get back later.

With a corn and soybean crop roster, Meredith farms 2,700 acres of silty clay loam on flat, river-bottom ground in Henderson County, Ky. He grew up on a grain and tobacco farm but watched it fall under a tough 1980s’ gavel. Unbowed, iron working became his trade until he bought 153 acres of land in 1991, working both metal and dirt until he clawed his way back to full-time farming 14 years later. Meredith’s wife, Lea, is a vital partner in the mix, operating all types of farm machinery and driving a school bus to maintain family health insurance.

The Ohio and Green rivers rub against Meredith’s farmland. Dry weather or late crop, he is blessed with water and has 1,650 acres under pivot irrigation. There are no moisture probes for Meredith, though—it’s strictly shovel and eyeball. With river proximity and weather variables, water needs vary wildly every year. Even after a blistering drought in 2012, he drew no crop insurance check due to strong yields under his pivots.

“In 2012, my pivots ran constantly,” Meredith recalls. “I changed the oil in my tire units three times and normally I don’t change them at all. Irrigation is the great variable.”

In August 2015, while repairing a pivot gear box, Meredith noticed exceptionally heavy, viny growth in his soybeans. When he began harvesting on Sept. 14, the pod-heavy section of Pioneer P35T58R yielded 98.34 bu. per acre—the top spot in the Kentucky Soybean Association yield contest. Planted April 29, the yields were particularly exceptional due to a deluge of spring moisture. Meredith even considered replanting. “It was so wet and I thought the beans were hurting, but I sprayed Bio-Forge and it worked like plant penicillin.”

The rest of Meredith’s acreage averaged in the 70s. “I set my standards high and feed my soybeans all they need. It’s not complicated: Treat them right and they’ll yield more,” he says. “I hang on the advice of my crop adviser Monty Parrish, and I really listen.”

Parrish, owner of Parrish Shop & Sales, Henderson, Ky., says Meredith is always ready for new management products or approaches. “On top of that, he’s willing to make the financial investment,” Parrish says. “You can’t try something without spending money. He wants to maximize production with new innovations and he isn’t afraid to learn.”