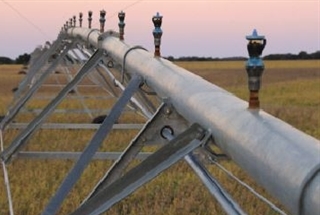 Ray Kopacz shouted over the rumbling of the cement truck one recent morning as workers patched up a break in the Stanfield Branch Furnish Ditch that cost farmers a full day’s worth of irrigation water.

The Stanfield Irrigation District had just started pulling water from the Umatilla River on March 31 and already they were faced with an emergency repair. Fortunately, Kopacz said they were able to catch the leak before it caused serious damage and the system was turned back.

“It’s getting to be that time of year everybody wants water,” said Kopacz, SID manager. “Water is like gold. If you don’t have it, this ground is worthless.”

Irrigation season is underway across the Umatilla Basin, and most districts are feeling better than they did during last year’s brutal, drought-stricken summer. Local snowpack is close to average, and so long as it doesn’t melt too quickly, farms should be able to make their stored water last longer into the season.

Right now, Kopacz said growers are focused on watering their wheat and cattle pastures, while getting a head start on vegetables like potatoes and onions. Corn should be planted in the next week or so, he said.

The SID covers about 10,800 acres of high-value farmland. It is something of a special case, since the district has 34,700 acre-feet of water guaranteed through the Umatilla Basin Project — an acre-foot being the amount of water it takes to cover 1 acre of land with 1 foot of water.

Once the Umatilla River drops below a certain point, the district switches over to pumping irrigation water from the Columbia River. In exchange, the SID leaves its water right from McKay Reservoir in stream to protect native salmon and steelhead runs during periods of low flow. Kopacz said the program, which was passed by Congress in 1988, has been valuable not only to protect fish, but it has also removed a lot of the guesswork for irrigators.