Getting The Best Of Pivot And Drip 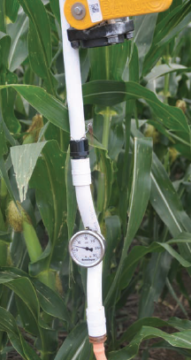 BY P.J. GRIEKSPOOR
Article from the Kansas Farmer – www.farmprogess.com

MONTY Teeter has spent his lifetime in arid southwest Kansas. Nobody has to tell him that the Ogallala Aquifer is being depleted too fast. For more than 40 years, Teeter’s business in Ulysses has been selling irrigation systems to area farmers. He started with center pivots, and a little over 20 years ago, he became the first dealer in the region to sell a subsurface drip irrigation system. Over the decades, he’s become acutely aware of the unique advantages — and the shortfalls — of each system. He’s also become ever more aware of the steadily sinking level of the Ogallala, and has adopted a motto and purpose for his business: “Making every drop of water count.” “Back when I started with SDI, we were already clearly mining the water at an unstainable rate,” he says. “Water is the key to the whole economy of western Kansas. Preserving the aquifer is critical.”

Center pivots are more than 90% efficient in the delivery of water patterns. Losses of efficiency are due to heat, wind, soil conditions and uneven terrain. Moreover, spraying the water on the plants above the canopy has the disadvantage of a high rate of evaporation, especially in arid western Kansas, where humidity is typically low and winds are brisk. Subsurface drip eliminates the waste of water to evaporation, delivering every precious drop to the roots of the growing plant. But it is expensive to install and maintain, and is of little value in getting the seed germinated and plants up and growing in particularly dry years. A third alternative After almost 25 years of selling both systems and seeing the advantages of each, Teeter decided a third alternative, a hybrid of center pivot and drip, might provide an answer for farmers who wanted to conserve water, as well as those who have wells that don’t produce enough water to run a conventional center-pivot system. Teeter went to the shop and started tinkering. He experimented with installing dripline on a pivot system and trying to fi gure out how to work out any kinks.

After about four years, he developed a system that he thinks works pretty well, although he’s still tinkering with it to adapt it to many areas of the United States. “Hey, I don’t know a manufacturer of anything that isn’t still working to make it better,” he says. “If I come up with improvements, I’ll add them.” When he went to patent his system, which he named Dragon-Line as a play of words on the way it works “draggin’ line through the fi eld,” he got another surprise. “It seems T-L Irrigation had the same idea about 15 years ago, and they put drip line on center-pivot nozzles,” he says. “They took out a patent on the concept, called it Precision Mobile Drip Irrigation, trademarked as PMDI. We pay a royalty for the use of the concept, and then patent the things that make Dragon-Line unique.” One of those things is a way to keep the spacing between the lines consistent as the pivot pulls them around a circle. “In a traditional pivot, it isn’t an issue because the nozzles are moving above the canopy of the crop,” he says. “But when you add a line that drops to the ground, it can get tangled up or catch on the cornstalks and get all bunched together.” So, he added a stabilizing bar to maintain the separation of the drop lines and wires to hold the drip tape steady. Another big difference is that Dragon- Line uses a new, patented pressure-compensating emitter system (DripNet PC) from Netafim. “Netafim’s pressure-compensating emitters allow the whole line to pressurize and maintain pressure. So you get a steady drip from each emitter. No puddles, no dry spots,” he says.

One more detail to making it work was planting. With a traditional pivot moving over the fi eld, having the corn in rows is of little concern. With Dragon-Line, which needs the dripline to stay in between rows, the fi eld needs to be planted in a circle, so the rows run the same way the pivot moves. This also helps eliminate wheel track issues. “That’s not a huge issue with GPS,” he says. “Although it does take some attention on the part of the planter driver to make sure his spacing is remaining consistent.” The very biggest challenge to getting Dragon-Line on the market, he says, has been the difficulty in finding farmers willing to try it out. Teeter doesn’t blame farmers for being reluctant to take chances with something as vital as watering their crop. But without getting systems in use, he was unable to collect the data that would convince farmers his Dragon-Line would work. “I really wanted to get a real farm-size trial,” he says. “So fi nally, I bought a 320- acre farm with a 200-gallon-per-minute well on it, and I put a Dragon-Line on one fi eld and a traditional pivot on the other.

I’m collecting my own data on water use and crop performance.” So far, the results have been positive. “I harvested 60-bushel wheat on that fi eld this year, and I’m on track to harvest 200- to 220-bushel corn,” he says. “That’s with about half the water of a traditional pivot system. This is extremely important to me. We have to use less water to extend the life of our aquifer. We need to figure out how to grow the same crops we do now with a lot less water. I think Dragon-Line is part of the answer.” One of the best things about Dragon- Line is the price, he adds. A traditional drip system costs between $1,500 and $2,500 to install. Dragon- Line can be added to a traditional center pivot for $150 to $200 per acre. He is getting some data-gathering help this year from Kansas State University, which is partnering in a project to test the efficiency of mobile drip.