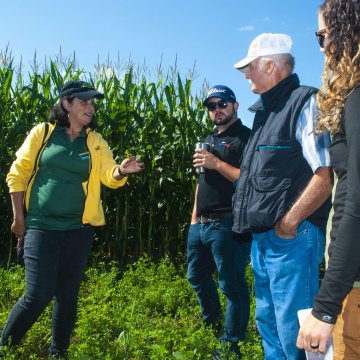 The results of Iowa State University’s (ISU) long-term Marsden Farm experiment showed the soil-saving benefits of adding forage legumes and small grains to a corn-soybean rotation, even when tillage was part of the production system.

Add no-till to the equation, and the results are magnified. That’s the finding of the Union of Concerned Scientists (UCS) in an analysis of the Iowa study.

The UCS, a nonprofit science advocacy organization, superimposed no-till production practices on the Marsden Farm study’s results and found as much as a 91% decrease in soil erosion if extended crop rotations including small grains and legumes were practiced “in the 25 Iowa counties with the most erodible soils . . .” says a UCS press release.

With or without tillage, the inclusion of small grains and legumes in extended rotations holds the key to decreased soil erosion.

“In longer rotations, living roots hold the soil down for longer periods of the growing season,” says ISU agronomist Matt Liebman. “Here in Iowa, small grains can be planted early – in March and April. Of course, red clover and alfalfa are perennials. Having living cover on the [surface] and living roots in the soil reduces the erosion. That’s true for any tillage system.”