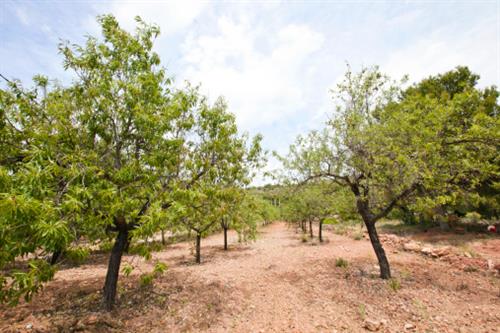 By now we’ve all heard of the serious drought underway in the Western United States.

Actually, a lot of the country is abnormally dry, according to the United States Drought Monitor, but only California and Nevada have so far hit the “exceptional drought” levels that top the charts. Oregon, Washington, Idaho, Montana, Peurto Rico and a wee tip of Florida have all tipped the scale into extreme drought. The rest of the country is doing better.

With water becoming a politically charged weapon in the agriculturally diverse Golden State, it’s no wonder that certain crops are taking more heat than others.

Almonds are in the same family as cherries, plums, peaches and apricots, but the shortage of water has hit them particularly hard. One common statistic being bandied about is that a gallon of water is required to produce a single almond. With the drought slated to get more severe as the summer wears on, things aren’t looking better for this tasty and much-sought nut.

To many almond farmers, the singling out of almonds seems unfair. They’re simply growing the same crop they always have, producing 80 percent of the world’s supply, according to NPR.

And they’ve got to get the H2O from somewhere.

The Water Is There, But Unavailable

According to Accuweather, there was less snowfall in the Sierra Nevadas this winter than is normal. Precipitation was low, and continues to be low. Coming on top of three previous years of drought, things are getting rough.

Of course, that doesn’t mean there’s no water; it simply means what water there is has become an even hotter commodity.

NPR interviewed almond grower Daniel Bays, whose groves sit next to a Central Valley Project federal canal. Watching the water flow past his thirsty trees is a sometimes embittering experience.

“It’s a little bit frustrating when you have to look at that every day. There’s water there but there’s none you can have unless you’ve saved it, banked it or paid through the nose for it,” he told NPR.

So what’s the solution? For Bays, it’s to dig wells. While the groundwater is salty and is stunting his trees, he has no other options. To do nothing would be to let them die, and have no crop at all.

Part of the problem with almonds is that they’re a major export crop. While other products (such as alfalfa) also use a lot of the wet stuff, they’re not being shipped off to other countries.

Plus, almonds present a problem in the form of their continuous nature. Unlike annual crops that farmers can choose not to plant or water when times get tough, orchards always need care or they’ll die. They’re hardly a fair-weather investment.

For now, almonds are probably not the last poster child for drought. They’re simply one of the most obvious examples of how the agricultural system suffers when Mother Nature gets tightfisted.