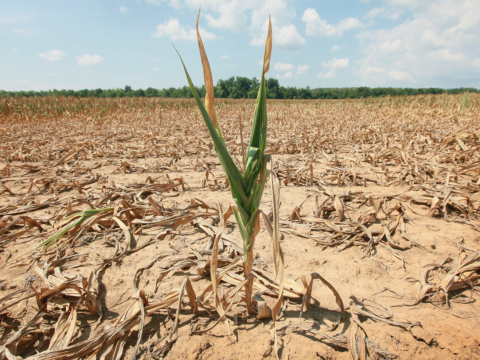 “This El Niño and this blessing of moisture we’ve had over the High Plains for a while is not going to last. This El Niño will peak in about the next month or so. After it peaks, I think we’ll see it rapidly diminish in intensity and go back the other way.”

And that outlook? If you don’t have a drought plan, get one.

“This El Niño should be history sometime in the spring,” Bledsoe says. “By late spring, I think it’s probably done. Which should be an indication that you should be very diligent and very plan oriented in how you’re going to use your moisture in the short term.”

However, that doesn’t mean an immediate return to drought. But Bledsoe, whose family ranches and farms in eastern Colorado, says now is the time to get ready. “I’m always thinking about drought, because to me, there’s no worse thing in agriculture from a business perspective that drought. It is the worst kind of weather phenomenon, in my opinion.”

December through February, the computer models think California could see some relief from the persistent drought that has gripped the region. There’s a drier signal for the northern tier of states, including the Pacific Northwest. “But the dry signal for most of the northern tier isn’t terrible. However, I’m pretty confident you’re not going to have much of a winter in the Dakotas.”

Since El Niño will still be in play, and an El Niño keeps the storm track more active the farther south you go, Bledsoe thinks a wetter pattern will continue through the early spring for the southern tier of states.

March through May, the West Coast stays pretty soggy, Bledsoe predicts. “Colorado, Nebraska, the western Dakotas…not bad. The model says we’ll have some moisture. However, the farther south you go, the better chances for better moisture you are going to have. The farther north you go, you may get shorted a little this winter and spring.”

June through August, the northern tier starts to get a little more moisture as El Niño weakens its hold on the storm track and it begins to migrate north. But looking at the Southwest gives Bledsoe cause for concern. “We see a little swath of brown from New Mexico, Arizona, creeping up into Southwest Colorado (during this period). That’s essentially how (the last drought) started several years ago. That’s why I’m saying, if you have good moisture now and into the spring, put it to efficient use.”