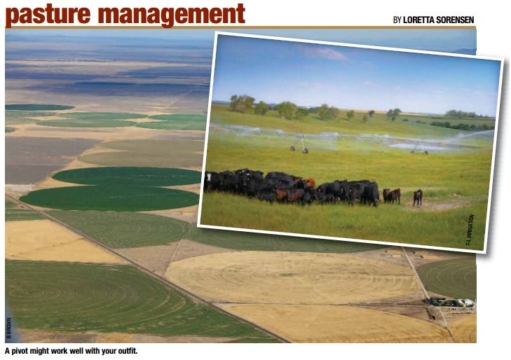 Round and Round the Pivots Go

Idaho’s high mountain desert Two Dot Ranch at Leadore, Idaho didn’t voluntarily implement the use of pivot systems 25 years ago. They had to change irrigation routines because they could no longer find the necessary skilled manual labor to continue flood irrigation. What seemed like a roadblock at the outset actually turned into a blessing in disguise. The Two Dot has been able to increase forage production on 2,000 irrigated acres by as much as 50% because their 17 pivot systems are that much more efficient in applying water.

“The pivots apply the water more uniformly,” Jordan Whittaker, Two Dot Ranch family member, says. “But it’s much more than that. When we used flood irrigation, it took between two and three weeks to irrigate a 200-acre field after we took the first cutting of hay from it. Now we can get the bales off and use the pivot to apply an inch of water across that same field in just four or five days. It’s a greatly improved turn-around time.”

Two Dot never takes more than one cutting from their hay fields. They grow alfalfa, brome and orchard grass as well as some timothy and clover mixes. After harvesting that first cutting, they irrigate to stimulate regrowth and then use the pasture for grazing later in the summer. Thirteen of the ranch’s pivot systems are about 30 years old. Most are T-L systems that operate with a continuous movement hydraulic drive.