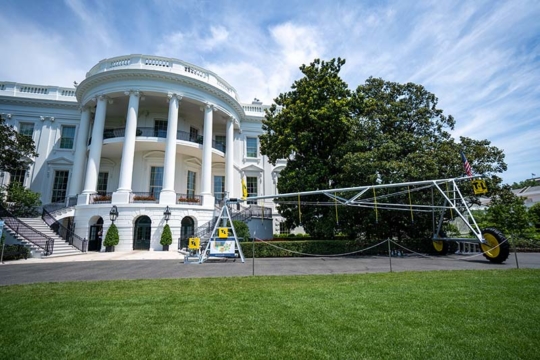 T-L IRRIGATION WAS ONE OF THE ONLY PRODUCTION AGRICULTURE BUSINESSES SHOWCASED.

Hastings, Nebraska, July 17, 2019 — Erecting a T-L Irrigation Co. pivot on the famed White House South Lawn was a crowning moment for the Thom family of Hastings, Neb. The three-generation-strong family business was one of the only production agricultural businesses to be featured in the 3rd annual Made In America Showcase hosted by President Trump on the White House lawn Monday.

“We’ll be celebrating 65 years manufacturing irrigation pivots in Nebraska this January. I’ve seen T-L pivots in just about every situation—in corn fields, vegetable fields, irrigating tree crops, with mountains in the background, in other countries—but seeing one with the White House in the background, well that’s pretty much it, isn’t it,” says Dave Thom, President of T-L Irrigation Co.

John Thom, T-L Irrigation Co. Vice President, got a call from the White House just 10 days prior to the event. One business was selected to participate from each state.

“We’re very honored to represent Nebraska and we feel it makes a lot of sense that we were the choice,” John says. “Our state has more irrigated acres than any other state and all our pivots are exclusively manufactured right here in Nebraska — even those that end up at the White House.”

Despite short notice, they made some test builds at their Hastings facility before loading the pivot on a truck with Craig Oswald and sending it down the road to Washington, D.C. John and fellow company Vice President, Chase Crawford, met the truck there and were surprised to find they were given a prime spot right next to the south White House Portico and the event stage.

“It was a super proud moment for me personally,” John says. “My grand parents just passed, but they would have been so exceptionally honored that a company they built, that their family members still run, was recognized on that level. Everyone at the company was very excited.”

President Trump stopped by the display and visited with John, Chase, and Craig for several minutes. They explained to him how irrigation works, how T-L pivots help farmers conserve water and increase yields and various specifics about their products.

T-L Irrigation Co. was founded by LeRoy and Jean Thom in 1955. They created irrigation pivots that were high quality, reliable and easy for farmers to use and repair. Their hydraulically driven system is unique among irrigation companies and have proven to be rugged and hardworking, just like the people who produce them at their Hastings, Neb., facility and those who use them in the United States and in 80 countries throughout the world.

“It’s been a lifetime of hard work and I was very proud to see the third generation of our family representing us at this level,” Dave Thom says.

T-L Irrigation Co. is a family-owned irrigation solutions business based in Hastings, Neb. For 65 years they’ve been committed to providing reliable and high-quality center pivots, irrigation systems, agriculture and irrigation equipment, and innovative water management products that are intuitive for farmers to use and repair. They distribute throughout the United States and to 80 countries.