History of the Pivot 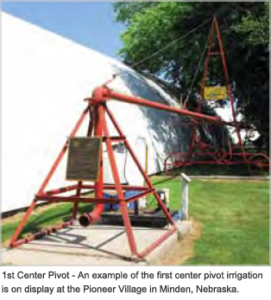 By Tharran Gaines It’s been more than 40 years since T-L Irrigation introduced its first center pivot irrigation system. But those four decades are only a blink of an eye in terms of irrigation history. Fact is, the use of irrigation can be traced back more than 6,000 years ago to when farmers in Egypt and Mesopotamia (present day Iraq and Iran) began using flood waters from the Nile and Tigris/Euphrates rivers to water their crops.

It wasn’t until 1952 that the idea of a center pivot sprinkler system was even conceived. According to the American Society of Agricultural and Biological Engineers (ASABE), which recognizes the center pivot irrigator as “An historic landmark of old_pivotagricultural engineering”, a Strasburg, Colorado, farmer named Frank Zyback patented the first “selfpropelled sprinkling irrigation apparatus” on July 22, 1952. The patent described the new apparatus as a series of mobile towers that carried a pipeline around a pivot. Sprinklers on the pipeline distributed the water to the crop.

Two years later, Robert Daugherty, the founder of Valley Manufacturing in Valley, Nebraska, acquired the patent and developed a commercial product that debuted in 1954. According to historians at Wessels Living History Farm in York, Nebraska, Valley had the market for center pivot systems pretty much to itself through much of the 1950s and ’60s, until the patent expired in 1969. Despite the advantages a center pivot system offered, it was still slow going for the center pivot industry as a whole through much of that time. In fact, only seven center pivot machines were built in 1955. By 1960, production was still limited to about 50 units a year. 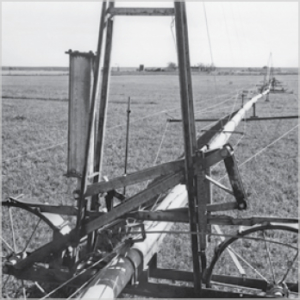 By the end of the 1960s, however, the market took off – just as the original patent protecting Zybach’s invention ran out. One reason for the sudden growth was that more and more farmers were facing labor shortages as young people were leaving the farm. Wessels Living History Farm records that one man using a gated-pipe system could irrigate approximately 320 to 480 acres per day. “However, if that same farmer could buy and install several pivot systems, he could supervise the irrigation of the irrigation of 1,200 to 2,000 acres per day.”

Secondly, center pivot irrigation units allowed even hilly land to be irrigated. Farmers who were looking to expand in the 1960s were finding that all of the flat land that could be irrigated by gravity was already priced out of the reach of the average farmer. However, there was still plenty of fertile, but hilly, land around the country — particularly in Nebraska and the High Plains — that could be purchased at a reasonable price.

Finally, irrigation provided an insurance policy against drought, which often plagued the Great Plains. With irrigation, farmers … and their bankers … could count on a crop, no matter the weather. It also allowed farmers in many areas to grow more valuable crops, such as corn, where only wheat or grain sorghum had previously survived. By 1972, there were 2,725 pivot systems in Nebraska alone. By 1980, there were 18,785. And by 2002, there were an estimated 258,000 center pivots installed around the world. “Even before the patent ran out in 1969, other companies were bringing out their own systems with their own unique differences designed to avoid patent infringement,” states Wessels’ website (www.livinghistoryfarm. org).

For example, Zybach’s first system siphoned some of the pressurized water from the main pipe and directed it to a piston that operated a ratchet-like linkage that moved the wheels. However, as early as 1959, an Australian company had modified the Zybach design to use electric motors on the wheels and a truss system to support the pipe at each tower.

A California-based pump company eventually brought the system to the United States, put rubber tires on the towers, instead of steel wheels, and began marketing it as Raincat. After going through various owners — eventually landing in Greeley, Colorado — Raincat went out of business in the early 1980s. Other new companies came up with their own innovations, including other configurations of electric drive and a “bow-string” truss system under the pipe spans. In contrast, early systems had used wires running from the top of tall towers to support arched or bowed pipe. However, the truss system bowed the pipe up and transferred the weight back to the towers. This was not only important for supporting the weight of the water, which at 14 pounds per cubic foot could add up to more than 18,000 pounds over a quarter-mile pivot, but it helped raise the span high enough to clear tall corn.

In the meantime, LeRoy Thom, a farm-raised agricultural engineer from Minden Nebraska, and later on his sons, Dave and Jim, decided they, too, could improve on the center pivot machines on the market. Founded in 1955 by Leroy Thom and a partner named J. G. Love, T-L Irrigation had already become established as a manufacturer of gravity irrigation systems and grain dryers. Seeing an opportunity to change the market, the Thom family developed and introduced a system in 1969 that used hydraulic motors to drive the wheels on each tower. The idea was that hydraulic motors would allow the systems to move around the field at a constant rate, rather than starting and stopping at set intervals as electric motors do, thereby applying water more evenly.

“We looked at electricity,” LeRoy admits. “But we had some reasons why we decided against powering them with electricity. First of all, farmers work with hydraulics every day and understand them,” he adds. “They usually can make what repairs are needed themselves.” Unfortunately, the 1980s took a toll on the industry as the export market for American grain literally dried up. Agricultural credit became extremely tight, farm machinery companies went out of business or merged, farmers were in danger of losing their farms and the majority of center pivot companies went out of business.

Today, T-L Irrigation, along with three competitors in Nebraska and a company in Oregon that only builds custom-ordered pivots, are the only ones that remain in business in the United States; and T-L is still the only center pivot manufacturer that uses hydraulic drive. Yet, there were certainly plenty of attempts in the late ’60s and early ’70s to enter the rapidly growing center pivot market. According to Wessels Living History Farm records, “Over the years, there have been over 80 individuals or companies who have tried to make and sell center pivot systems, even though some of the smaller companies were bought by the giants.”

Most, however, simply tried and failed … like Paul Geis, a car dealer in York, Nebraska, who also had a small business that made irrigation pipe. He introduced his Kroy (York spelled backward) center pivot system powered by compressed air in the late ’60s. When the system failed to catch on, Geis sold it to a well driller in Sidney, Nebraska, who quit the business in the late 1970s. Additional names that came and went include Tumac, Pringle, Mel Brown, Olson and Gifford Hill.

Fortunately, those that have remained in business continue to develop new technology that allows farmers to be even more efficient. For example, T-L not only offers linear and towable units, in addition to circle and corner pivot irrigation systems, but remote control that allows the operator to start, stop and monitor the system from an office computer or cell phone. Pivot sprinkler systems can also be configured to nearly any shape and size a producer wants to cover. Needless to say, the industry has come a long way since Frank Zyback had an idea for an overhead pivot sprinkler system that simply pivoted in a circle.