Gibbon, Nebraska
Back to Testimonials

"I don't know what it is, but I also don't seem to have as much trouble with the nozzles clogging up on the T-L units as I do with the other units."

As his dad looks toward retirement, this Nebraska farmer looks to reduced tillage and center pivot irrigation to reduce labor requirements.

Dan Mercer can think of plenty of reasons he prefers pivot irrigation to traditional flood irrigation, including less labor, more even water distribution and the fact that it increases the property value. And he can come up with just as many reasons he prefers T-L units.

Unfortunately, he is running out of places to put them. In fact, the most recent T-L pivot is a quarter circle unit that covers just 45 acres.

«There’s a pasture that cuts into the field, so it didn’t leave much room for a pivot,» he says. «But I think it will still pay off.»

Of the 1,300 acres Mercer farms with his father, Thomas Mercer, all but about 100 acres is irrigated. On the remaining total, eight center pivot units, including seven T-L units, cover approximately 950 acres. The first of those were installed in 1995.

«The last five units we’ve bought have all been T-L models,» he relates. «It’s not that we don’t want any more electric drive units. We just like the way the T-L machines move continuously for nice, even water application.

«They seem to be more reliable, too,» Mercer adds. «Come spring, I hit the button and it works.»

Of course, Mercer says there’s a little loyalty to the community involved, as well. One factor is the location of the T-L factory, which is only about 40 miles away. Another is the fact that one of Dan’s good friends works for T-L.

«I don’t know what it is, but I also don’t seem to have as much trouble with the nozzles clogging up on the T-L units as I do with the other units,» he adds. «I don’t know if it has something to do with the way they build the pipe or what.»

Dan insists the reliability of T-L units is particularly important these days as his dad looks toward retirement, having farmed in the area since 1966. «It’s tough to hire anybody for just the spring and fall,» Dan relates. «If they need a job, they obviously prefer something full time.»

Consequently, Mercer has been trying to get away from as much furrow irrigation as possible … even if the newest T-L only covers a quarter circle.

«We’re down to where we can’t put in any more full-circle pivots,» he explains. «One of the things I do like about the T-L half-circle pivot is that I can adjust the amount of time it sets at the stop before it reverses direction. I usually set it for eight to 10 minutes so we can get the edges watered a little better.»

Mercer says the other challenge to adding more pivots is talking the landlord on their rented land into splitting the cost. Right now, those are the only fields left that don’t have pivots on them.

«The half-swing is on rented land,» he explains. «And on that one, we did a cost share on the pad and the pipe to the base with the agreement that I would have a contract on the rental for a minimum of seven years. In addition, I paid for everything from the pad up, which means I own the pivot. I figure if I ever lose the lease, I can always move or sell the pivot itself.»

In the meantime, Mercer continues to put the emphasis on corn production with a rotation that consists of three years of corn, followed by one year of soybeans. With irrigation, corn typically yields in the range or 170 to 220 bushels per acre, while soybeans average 70 bushels or more.

«I’ve been looking at trying to go with a little more no-till on some fields, just to further protect against erosion,» he says, noting that the transition becomes a lot easier with the elimination of furrows. «But I also look at it as a way to reduce labor, which is really what it’s all about these days.» 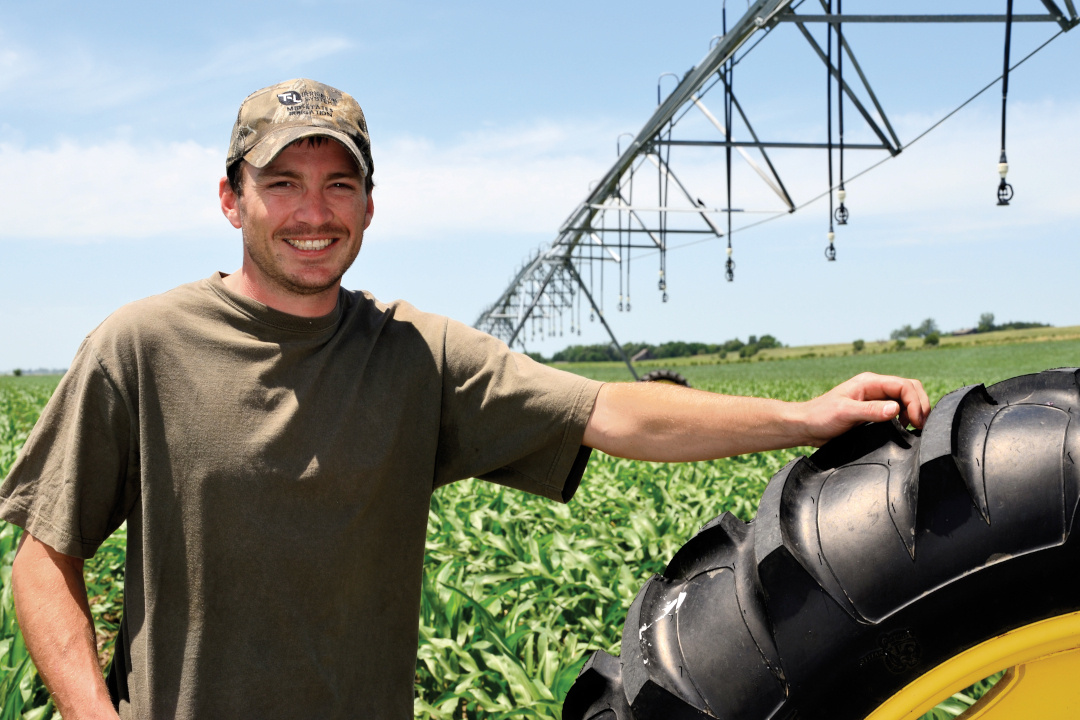