Northern Victoria, Australia
Back to Testimonials

"We think T-L's represent value for the money invested. Since we can shift a T-L pivot so easily to another field or to develop another 80 acres of ground, we figure that halves the cost of that pivot."

Backing up his observation that, «Australia is a dry continent,» Phillip Lamattina points out that his family’s 6,000-acre farm in Northern Victoria averages only ten to 12 inches of rainfall a year. Unfortunately, even less falls on its sandy loam soil during dry spells like the one experienced last year.

That’s why his father saw the need to begin irrigating on the family’s former farm in Southern Victoria with fixed center pivots 35 years ago. Now Phillip and his two brothers depend on 37 T-L center pivot sprinklers to irrigate carrots year-round on 1,500 acres.

Their procedure is to crop carrots on a piece of land for four or five years, then shift their easily-towable T-Ls to either fields that have been fallow for that same period or to newly developed land.

There’s a good reason most of their T-L center pivots water only 80-acre fields rather than the larger fields generally seen in the U. S. A. They consider 80 acres to be the size limit, «Since carrots are temperamental and don’t like to be under any stress whatsoever,» according to Lamattina.

The shorter line of towers can get around a field more often, usually applying two-thirds of an inch of water with each revolution. Depending on the season, a carrot crop can require anywhere between 30 to 60 rotations of the center pivot before reaching market size.

That kind of intensive usage really racks up the hours, too. The Lamattinas estimate that at nine years of age their oldest T-L has already clocked 12,000 hours in making its steady rounds.

«It’s structurally still sound,» Lamattina reports, «We believe it can do many, many more hours before it has any sort of major problem.» Even with that sort of heavy usage their experience has been that annual maintenance and repair costs are quite low.

The family initially also considered installing electric center pivots. However, the hydraulic drive offered by the T-Ls was the feature that cemented their purchase decision then and during the ensuing years.

«For want of different terminology,» Lamattina smiles, «the T-Ls are idiot-proof. If there’s a problem we can send an everyday sort of worker to the pivot and he can find the problem and deal with it.»

Another benefit the Lamattinas say they consider a big plus about the T-L hydraulic drive is that it’s continuously moving, not starting and stopping. While this may have some positive effect on crop uniformity, the big payoff comes in lessened maintenance needs, he says.

And, yes, like other farmers around the world, they, too, were concerned about the possible safety hazards of electric drive center pivots. As Lamattina observes, «We farmers are all the same. While we’re doing a job, we often are thinking about doing something else and let our attention wander or we do something to try to save a little bit of time. With an electric unit that could be costly.»

Yet another advantage the Lamattinas appreciate about their T-Ls is the back-up service their dealer provides. They’re convinced that sooner or later anything mechanical will require service.

But, when that time inevitably arrives with a T-L, «We know all we have to do is just ring one number for quick dealer service. That’s important to us, because with carrots we can’t afford a sprinkler not working,» he says.

The family has an interesting philosophy about the initial cost of its T-L center pivots, too: While like most farm investments a T-L can’t be considered «cheap», it is «quite affordable».

«Well, we think T-L’s represent value for the money invested,» Lamattina says. «However, since we can shift a T-L pivot so easily to another field or to develop another 80 acres of ground, we figure that halves the cost of that pivot.»

«Our T-Ls have proved themselves to be low maintenance, also reliable, consistent irrigators—and cost-effective.» 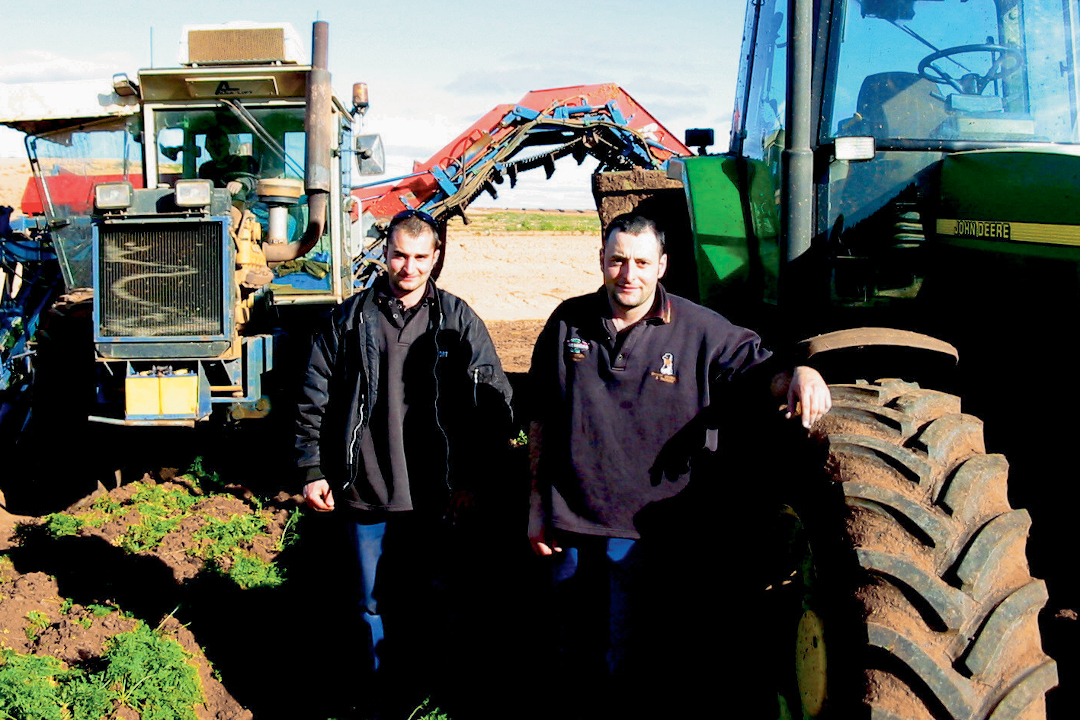