Hastings, NE
Back to Testimonials

Back when Mark Utecht and his dad raised hogs near Hastings, Nebraska, the wheat grown in the corners of fields irrigated with T-L center pivot units went to good use. Not only was it an extra dryland crop for the cash grain market, but the straw was actually needed for bedding in the hog barns. A lot of things have changed since then, though.

Now that the hogs are gone and the barns are empty, there’s no longer a need for straw. Plus, the center pivot, which was adjacent to the hog operation, was already close to 40 years old. So, in an effort to “kill two birds with one stone,” Utecht installed a new T-L corner pivot system this past spring that covers the entire field. The irony is that a portion of the old pivot is still going after 39 years.

“Dad installed the very first T-L center pivot in 1973; but that part of the farm went to a cousin who has since replaced it with a new T-L,” Utecht explains. “However, the one I just replaced was a pivot that Dad bought and installed in 1975.”

While the original unit utilized chain drives on each tower, Utecht had since replaced all but one of those with hydraulic motors on the wheels, bringing it closer to today’s standards. Still, the unit was too good to totally retire as salvage.

“I sold eight of the towers and spans to a neighbor,” he explains. “He hasn’t done anything with four of them yet, but he has already used the other four to build a pivot that covers a corner that he can’t reach with the main pivot.”

In the meantime, Utecht enjoys the benefit of being able to irrigate approximately 152 acres in the field with the newest unit … particularly since approximately two-thirds of his 600 acres consists of corn-on-corn.

“I’ve always felt like corn gives me the best return on investment,” he continues. “And I still do things the traditional way by using a disc/chisel in the fall and following it with a field cultivator in the spring before I plant.”

Not surprisingly, he feels the same about T-L center pivot units. They’re simple and reliable.

“I’ve priced other brands, but I’ve always stuck with T-L, partly because of the hydraulic drive, but mainly because of the dealer and the service,” he says. “I’m more comfortable around hydraulics and think they’re a lot simpler than electric drives. Plus, every so often, I hear another horror story about the service, or lack of it, that somebody got from another brand.”

After taking over the family farm and beginning to farm full time in the mid-’90s, Utecht says he actually bought his first T-L unit on his own in 2005. That was placed on a quarter-section farm that he purchased in an effort to expand the operation. Otherwise, all his land lies south of Hastings within a few miles of the home farm.

“At this point, everything is under irrigation with all but 70 acres being under pivots,” he relates. “The only field that is still being flood irrigated has a good slope to it, so it’s easy to irrigate. But it still takes a lot of work that I don’t have with the pivots,” he adds, joking that his time isn’t worth much.

The only other regret that Utecht has is that the newest corner pivot system is the only one that makes a full circle. The rest of them automatically reverse due to a farmstead or other obstacle blocking the path.

“I wish they all went in a full circle,” he insists. “But at least with this newest T-L, I’m getting more of the field watered than we ever did in the past.”

In the meantime, most any farmer in Nebraska will tell you that corn returns more per acre than wheat. And as livestock disappears from more and more row-crop operations, there certainly isn’t as much need for straw. 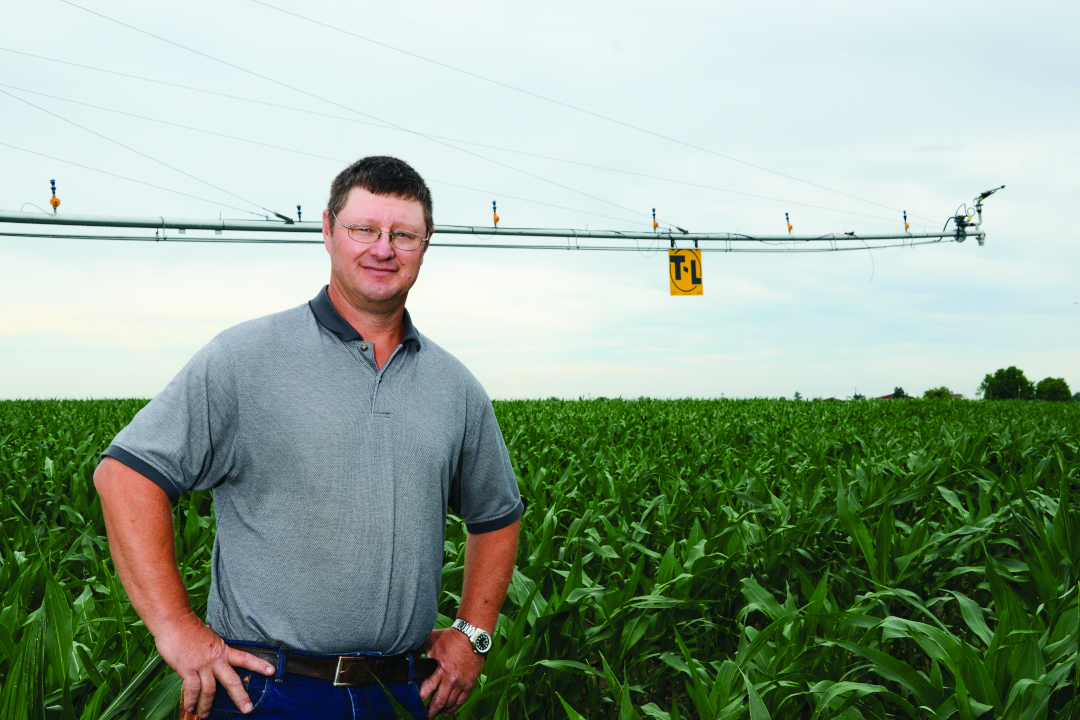