McGuffey, Ohio
Back to Testimonials

"Our T-L just keeps going 'round and 'round. We don't have to move any pipe, either."

For 15 years the Rohrs Brothers, of McGuffey, Ohio, depended on a travel gun to prevent their carrot crop from drying out. Two factors, however, caused them switch to a T-L center pivot three years ago.

According to John Rohrs, «One, our carrot acreage of large carrots for dicing expanded — and two, it never failed that our traveling gun always needed to be moved in the middle of the night! It was time to find a better solution.»

Their T-L machine made only two circles that first year due to adequate rainfall. Regardless, Rohrs says, «This was enough to justify the cost of the pivot for that year.»

But, it was this past summer, the driest since 1988, that really convinced them their purchase decision was right. They seldom shut down their T-L for more than a week at a time.

«When we started digging July 25, our carrots under the T-L were four tons an acre better than those outside the circle,» he continues. «Within the next two weeks we were at more than 25 total tons an acre, which is pretty hard to do with 90 degree and higher heat. When we pulled out August 18 the yield was more than 30 tons per acre, and we’ll be back into them again.

«The amount of tons we’re taking off the field is just phenomenal! We’ve more than justified the entire pivot on this one year’s production alone. We’ll probably be putting in at least one more T-L here soon, and a couple more in the next two or three years.»

John believes that their T-L’s continuous movement and even water distribution contributed to these yields, because he never saw any of the «spoking» that start-stop electric pivots can cause.

Rohrs comments that he initially steered toward a T-L due to its simplicity, with fewer moving parts and greater reliability. Plus he didn’t want anything to do with electricity.

«It’s a headache to try to find electrical problems,» he says. «But, we have a lot of things on the farm that deal with hydraulics, which can be fixed pretty simply. It just seems to me that there’s a lot more reliability with hydraulic systems than with electric systems.»

If they have experienced any problem with their T-L it’s in remembering to make sure the fuel tank on the engine is kept full, Rohrs mentions, tongue-in-cheek.

He says running the T-L is only a matter of starting it up, setting the water and safeties, then, «You go home and forget about it.» John admits that when their T-L was new he got up at 2 a.m. for the first several nights to check it. He soon learned that a drive-by check afterbreakfast and before dark were more than adequate.

«This is important, because I don’t have enough time now to go out and continually monitor the irrigation unit,» he says. «Our T-L just keeps going ’round and ’round. We don’t have to move any pipe, either.»

Their T-L’s upkeep cost has been only $200 to $300 a year. This includes replacing one ball valve on a hydraulic jack and upgrading to one-way, 180 degree nozzles at the towers to keep water off them. Rohrs points out that, «We don’t need many spare T-L parts around.»

They’ve also noticed their drop sprinklers are getting the water down closer to the crop, providing a «soft, misty» water flow. Water isn’t visible on top of the ground when finished as they’d seen when using the traveling gun, even with applications up to an inch-and-a-half.

The Rohrs particularly appreciate the towable feature of their T-L. From start to stop Rohrs and only one other man can move it from one quarter-section to another in just an hour-and-a-half to two hours, start to finish

«When people ask us what we think of our T-L,» Rohrs remarks, «I like to sum it up by saying, ‘It’s proven and it’s reliable’.»

In addition to the usual corn and soybeans, they grow 750 to 800 acres of carrots and tomatoes annually. Their vegetable enterprise was started by their father in the late 1950s. Much of their tomato crop goes to Red Gold for salsa and catsup. Their carrots are sold to companies in eight states.

While the traditional rowcrops fluctuate in price quite a bit, their vegetables are grown on contract at a set price, thus their profit is solely determined by tons produced. 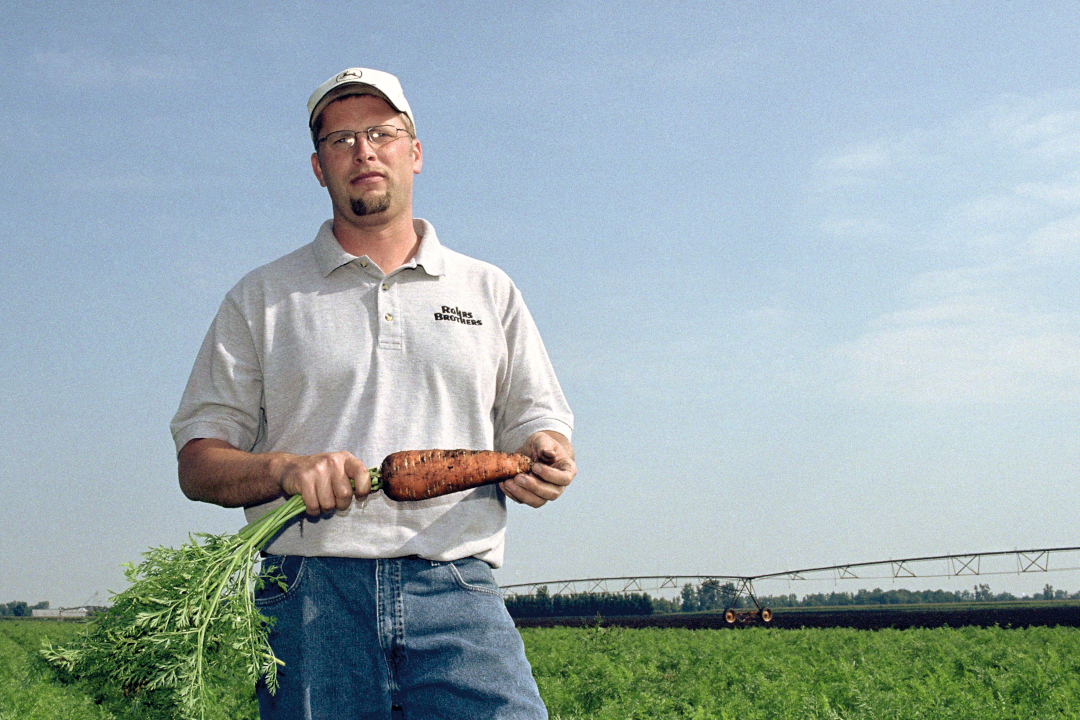