Dr. Izak Hattingh can still recall when he bought his first T-L pivot for use on his farm in Free State Province, South Africa. It was in 2000 … the same year his oldest son, Izak, was born. Today, his son is nearly a grown man at 18 years of age and the T-L pivot is still working like new.

Hattingh says he was first introduced to T-L systems when he and his wife, Sanet, visited the U.S. in 1997 with family friends, Boet and Yvonne van Tonder. During the trip, they were invited to visit the T-L Factory in Hastings, Nebraska, by T-L International Sales Manager, Randy George.

“Boet had just ordered his first T–L pivot for use in South Africa,” Hattingh relates. “As we were shown around, we were especially impressed by the quality of material used for construction and galvanizing, as well as the unique hydraulic system. That was something totally new to us.”

Consequently, Hattingh, who operates as Wilgepoort Farming, purchased a unit for himself to cover 89 acres (36 hectares) just three years later. Two years after that, in 2002, he bought a one-span T-L towable pivot that covers 2.7 acres (1.1 Ha) per revolution.

In addition to sheep, the farm produces corn, soya beans (soybeans), potatoes and Drakensberger cattle, which is an indigenous breed. So, while the stationary pivots are used on the row crops and potatoes, the towable pivot, Hattingh explains, is used to irrigate eight circles of pasture.

“We can easily move the pivot between the different locations, thanks to scissor jacks on each tower, to make sure we have enough grass for a good lamb crop,” he explains. “Even though we have an annual rainfall of around 600 millimeters (23 inches) per year, drought at critical times is still our biggest concern, especially in our sandy soil.”

Fortunately, irrigation water is never in short supply, since it comes from a reservoir with nearly 120 square miles of surface area behind the Vaal Dam. Constructed in 1938 and one of the largest dams in South Africa, it is located on the Vaal River, which, in turn, is one of South Africa’s strongest-flowing rivers and the fresh water supply for Johannesburg. However, the pivots serve a role other than just providing water when it’s critically needed. Most of the fertilizer is applied through the pivots, as well.

Although the crop rotation is generally between soybeans and corn, Hattingh says, they also incorporate potatoes into the mix under irrigation, which helps to control the weeds and insects through chemigation. We feel the continuous movement of T-L gives us uniform distribution of chemicals.

Unfortunately, Hattingh is only able to spend part of his time on the farm, since he also operates a veterinary practice that concentrates on beef cattle, wool sheep and horses. Meanwhile, his son, Izak, is just starting college, studying to be a veterinarian, while his son, Drikus, is starting 10th grade. And when his two sons aren’t involved in school, they’re participating in equestrian endurance rides, which additionally keeps Hattingh involved in their activities. Hence, running pivots that are relatively maintenance-free is especially important. That’s also the reason he hired Johan Naude as a farm manager nearly 10 years ago.

“Johan is responsible for looking after the pivot maintenance — the very little there is,” Hattingh says. “He always tells me how well he sleeps at night when a T–L is running. The other brands of pivot on the farm are like babies,” he adds. “You have to check on them every hour — otherwise a colic baby is waiting for you in the morning.”

The other brands of pivot on the farm are like babies,” he adds. “You have to check on them every hour — otherwise a colic baby is waiting for you in the morning.”

The other brand Hattingh refers to are the two 123-acre (50Ha) electric pivots he purchased in 2008 when the South African Rand was weak against the U.S. dollar. That’s when the problems started. The first issue, he says, was cable theft.

“Today, ten years later, we still experience a lot of problems with that brand,” Naude adds. “If it is not a gearbox problem, it’s drive shaft couplers, contactors on the tower control panel, or faulty span cables. It is a high-maintenance and costly pivot; where on the T-L pivot, we’ve never changed one single gearbox, thanks to T-L’s hydraulic drive.”

Hattingh says he hasn’t made the same mistake twice, though. He has since gone back to T-L pivots, due to the simplicity of the system, the continuous movement and the exceptional reliability. The latest models include pivots that cover 49 acres (20 Ha) and 29 acres (12 Ha) respectively. In the meantime, FMS, his nearest T-L dealer has been surveying the farm for installation of two more T-L units — a 37-acre (15 Ha) model and another 49-acre (20 Ha) unit.

“Danie Erasmus, our dealer in South Africa, is always available for small spare parts and technical support,” Hattingh adds. “Randy George is also … after so many years … willing to visit us here on the African continent. He always tries to support us in difficult times when the exchange rate bullies us.

“We appreciate T-L for providing us with quality machinery to help make food security a reality on the southern tip of Africa!” 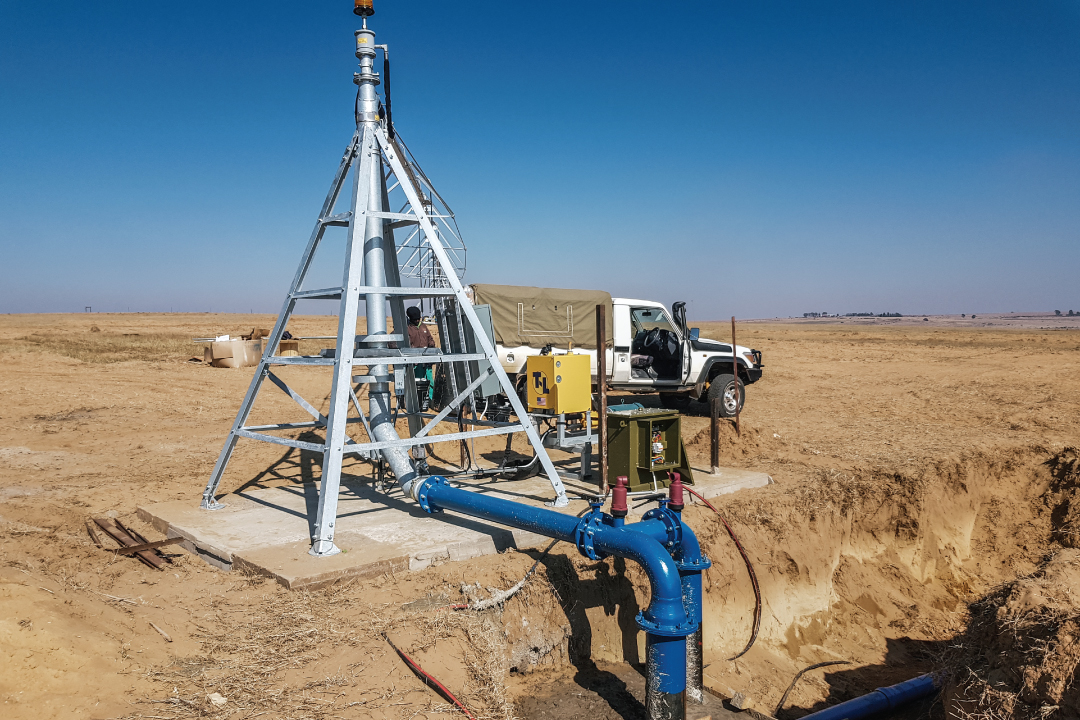