Bonanza, Oregon
Back to Testimonials

“They’re easy to work on and when it was time to install more pivots I went with T-L again and will in the future.”

The view afforded from Hank Cheyne’s Bonanza, Oregon, front window includes a sweeping vista of mountains and every one of the 10 irrigation systems he uses to water his 1,000 acres of alfalfa, barley, wheat, and oats. He uses his vantage point to keep vigilant watch over the sprinklers, including four T-L pivots with corner machines, one T-L linear system and five electric pivots. Their constant operation is critical to the success of his crops, which have just 90 frost-free days to produce in the semi-arid valley that otherwise receives a scant 12 inches of precipitation per year.

“If you’ve got a pivot down for a week, there’s the potential it could cost you an entire cutting of alfalfa,” he says. His sandy soils don’t retain water long and the dry climate quickly wrings moisture from the growing plants. “The humidity is usually in the teens, so when it gets hot here it absolutely cooks things, dries them right out.”

Cheyne starts irrigating around May 1 and takes his first cutting of alfalfa in early June. He then settles into a schedule of cutting every 28-30 days for up to four cuttings per season. “June and July are crunch time for our pivots,” he says. “They’re running all the time.” Each pivot gets 1,300 to 1,400 hours of use during the 90-day production window. To counter the dry environment during the hottest summer months, Cheyne runs his pivots at just 12 inches per minute applying 1-inch of water or more per pass.

When everything goes correctly, Cheyne can produce crops the generations of his family that farmed in the valley before him couldn’t imagine. Cheyne is the fifth generation to farm in Klamath County just north of the Oregon-California border. The reservoir he pulls water from, Gerber reservoir, is named after his mother’s family. Their original homestead rests at the bottom. He now farms land his grandfather farmed and stewarded from flood irrigation to wheel lines. In 1995 Cheyne took the next step, replacing labor-intensive and inefficient wheel lines with T-L pivots. “Initially the simplicity of the T-L pivots as compared to the electric systems is what drove our purchase decision,” says Cheyne, who prefers to do most of his own service work. “They’re easy to work on and when it was time to install more pivots, I went with T-L again and will in the future.”

As Cheyne acquired land he also inherited existing electric pivots. With the nearest electric pivot dealer 45 miles away, he had to teach himself to work on these pivots as well. “It’s not bad because I understand how they work, but I work on them twice as much as the T-L systems,” he says. The electric systems take a beating on his fields that have some slope. All the stopping and starting results in the gear boxes wearing more. “The constant movement of the T-L units is a lot easier on the gear boxes because they don’t have the shock of stopping and starting on the hillside. We don’t have to replace them quite as often as the gearboxes on the electric units.”

Each of Cheyne’s three types of T-L units have their advantages. His linear system stretches a quarter of a mile wide and moves 3,300 feet back and forth across his field. He uses a small diesel engine to run the hydraulic pump. “That engine has 22,000-23,000 hours and I’ve never touched the motor,” he says. He credits the engine’s durability to the fact it’s only running at about half power all the time, just enough to run the hydraulic pump. “In an electric system, the motor would have to throttle up to full speed to generate the proper electrical current to get the span moving with every stop and start, which causes a lot more wear.”

For his corner systems, he prefers the simplicity the T-L hydraulic planetary design affords overall, but especially when it comes to swinging out the extra arm on his pivot. “When you look at my electric corner systems, there gets to be a lot going on,” he says. “I can open the T-L box and troubleshoot pretty quickly if something happens.” He also can count on support both from his local dealer, Miles and Patience Hankins, at Aluminum Pipe and Repair in Bonanza, and even by calling the factory directly—which he resorted to when he didn’t have a local dealer.

When doing his own work, he appreciates the reduced risk he takes with the T-L units, too. “With only 28 volts of DC current running down the span to the corner units instead of 480 volts of AC, the T-L pivots are easier and safer to work on.” Safety is one of several reasons Cheyne plans to replace the electric pivots with T-L pivots as they wear out. He predicts having all T-L pivots will cut down on repairs overall and will reduce the variety of parts he keeps on hand.

Fewer repairs mean his T-L pivots are more likely to be ready to go when it’s crunch time. “When we take a cutting of alfalfa, we haul the bales off the field immediately and have the pivot running that night or the next day and it doesn’t stop running until 5 to 6 days before we make the next cutting. If it’s down for a day or more, it’s potentially costing us yield in this environment,” he says.

Efficient and effective sprinkler irrigation has taken the family farm to the next level of production and Cheyne intends to keep it that way. “If my grandfather could see how we’re irrigating and how much we are able to produce with pivots, he’d be flabbergasted,” Cheyne says. His grandfather passed in 1974 right before they installed their first wheel lines. “I don’t think he could fathom the change in our production that has occurred from flood irrigation to today. We’ve more than doubled our yields.” 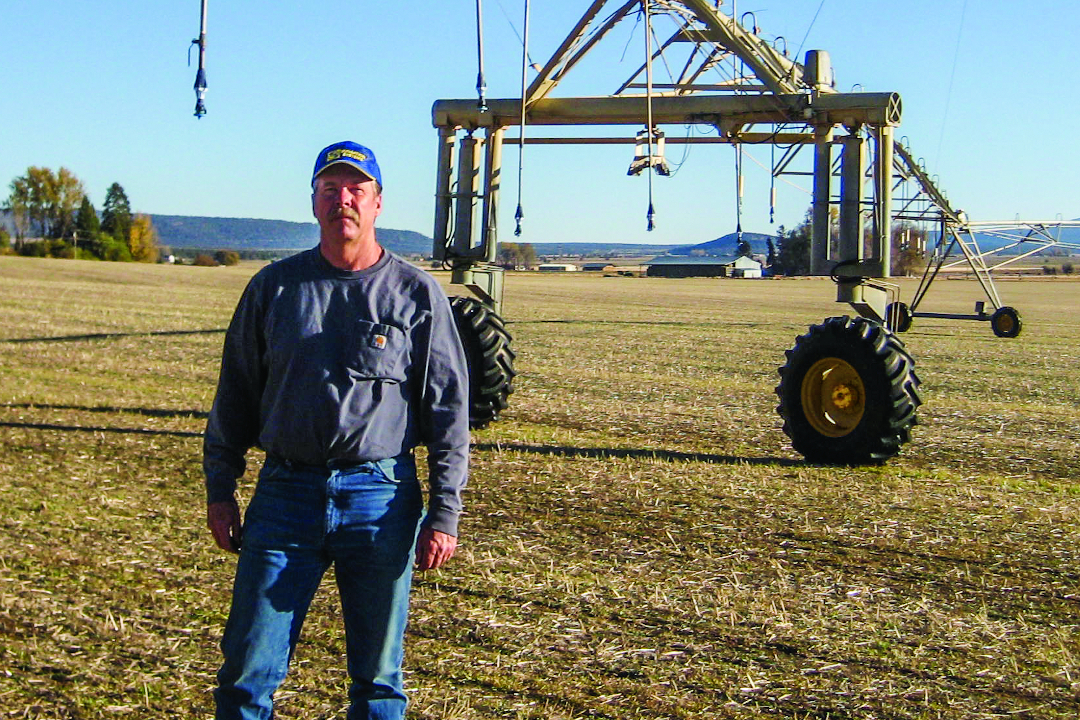