Brady, Nebraska
Back to Testimonials

"For the peace of mind and the service it gives me, I think my best dollar's right here with a T-L."

For ten years now, after installing his first T-L center pivot sprinkler, Blaine Garrelts often comes home and exclaims, «My gosh! That pivot’s still running!» For 14 years before that, he’d been relying on water drive and electric pivot systems, and was more apt to come home to report, as he walked into the kitchen, «My gosh! Another pivot’s quit.»

Garrelts has been in the hay business for 37 years, and for the past 24, has been producing and marketing his own irrigated hay. He now bales 700 acres of alfalfa and 300 acres of brome grass near Brady, Nebraska. His customers are scattered all over the country: Dairies in Pennsylvania, Florida, and Tennessee; race tracks in New Mexico; a large horse ranch in Texas; and various feedlots, dairies, and pleasure horse owners in between.

«Being able to irrigate is everything,» Garrelts stresses. «Alfalfa takes a lot of water and likes it fairly often—I put on seven to eight inches for each cutting, an inch each round. If I couldn’t irrigate, I couldn’t raise alfalfa.» Before he installed his first hydraulic T-L system a decade ago, he talked to and observed neighbors using either TL’s or those running electrics.

What convinced him? «It didn’t seem like the ones with T-L’s were having many problems with them at all, while those who owned electrics appeared to be working on them all the time,» Blaine observes. «Then I looked at how a T-L was put together. I realized that if I had to, I could work on one myself. I’d learned that it’s hard to get service way out here without having some downtime. Also, lots of voltage and water and mud didn’t impress me too much.»

Those were my reasons for buying a T-L instead of a ‘Spark-OMatic’!» Garrelts reports «real good experience» with the eight T-L center pivots he now has. They’ve been low pivot maintenance, and he says he can’t really name any problem he’s ever had with any of them during that time.

Blaine makes a comparison. He has an electric pivot on leased land running so close to one of his T-L’s that their end guns come within five feet of each other. In this particular location, the soil is rather boggy and different from the usual sandy loam under his other systems. Both systems are ten years old.

«There have been three gear boxes replaced on the electric even though it’s been covering only a 65 acre half circle. Meanwhile, I’ve had zero gear boxes replaced on the T-L. I haven’t put a dime into repairs for the T-L in all that time.» Blaine adds, «I think most of the electric’s problems have been caused by their starting and stopping all the time.»

«That’s just got to be tremendous stress. My T-L’s, though, are simpler and move continuously.» Garrelts says, ruefully smiling, that it always gets his attention when he has to walk up to the 480 volt box on that one leased electric system and stand in water. He’s never been shocked, but points out that if he had, he wouldn’t be here.

«When a neighbor asks me what I think of T-L center pivots, I always say, ‘If you want to be messing with your pivots all the time, buy a ‘Spark-O-Matic.’ As for me, well, I’m sold on T-L. I want to concentrate on what I’m supposed to be doing, not spending my time trying to make pivots run. And, yes, you can spend a lot of money for a center pivot. But, for the peace of mind and the service it gives me, I think my best dollar’s right here with a T-L.» 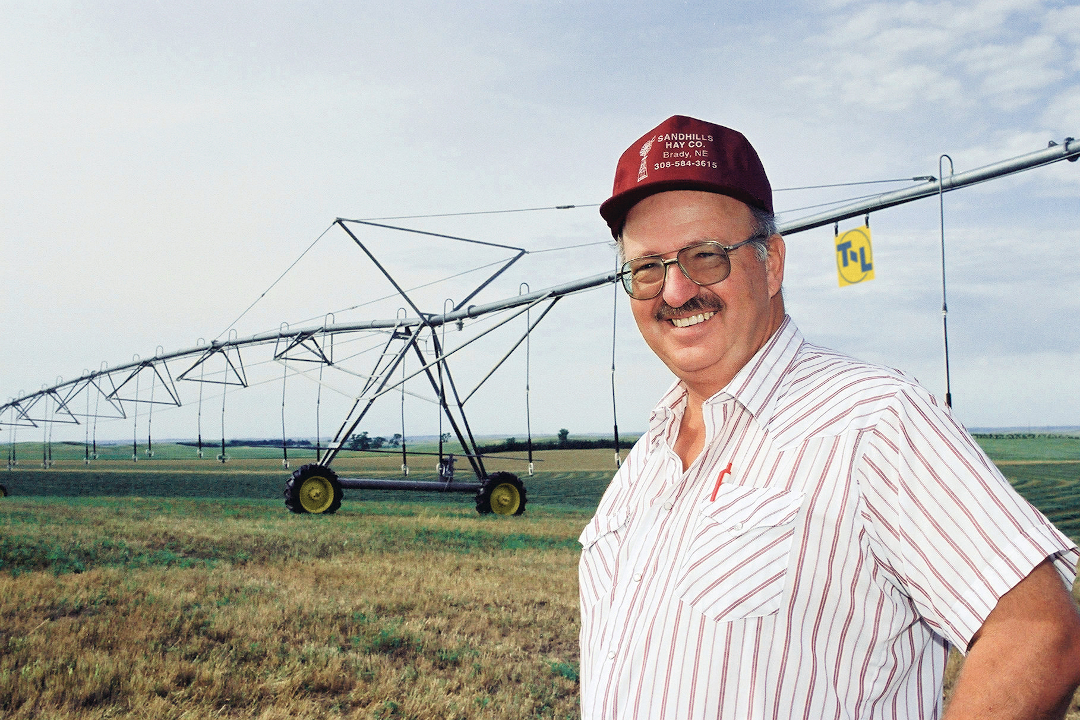