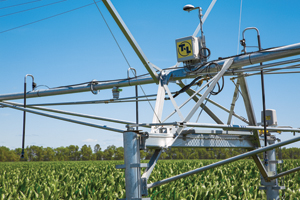 T-L Irrigation Co., the exclusive world manufacturer of hydrostatically powered pivot irrigation systems, is pleased to announce they have been awarded two patents by the United States Patent and Trademark Office for their GPS Navigation Corner System. These patents demonstrate the commitment by T-L Irrigation Co. to make technology easy to use while maximizing performance for growers around the world.

These patents present the unique method of waypoint navigation that T-L Irrigation Co. has implemented for their GPS Navigation Corner System. Also included is the addition of a Wheel Angle Sensor, exclusively offered by T-L Irrigation, for improved track on track accuracy, pass after pass, year after year.